Below is the official announcement Tom Truscott and Jim Ellis (who first coined the term USENET) put together to announce the creation of USENET. The press release reveals that although both had an idea that this could be something big, neither could have imagined that it would explode to the degree it has over the years. For over 30 years now, USENET newsgroups quickly outgrew its purpose of solely serving as a communication channel between Universities. Home to thousands of communities, USENET remains an active destination and resource for many to share, interact and collaborate. 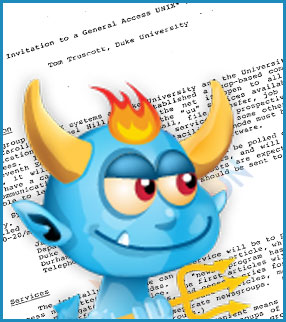 A group of UNIX systems at Duke University and the University of North Carolina, Chapel Hill, have established a uucp-based computer communication network. Admission to the net is open to all UNIX licensees. In addition to providing the “uu” services available in the Seventh Edition of UNIX (remote mail, file transfer, job execution), it will provide a network news service. A prospective node must have a call in facility, call out facility, or some other means of communication with another UNIX net system. The node must have, or be able to legitimately obtain, uucp and related software..

Systems which do not call-out to the net must be polled occasionally. We will poll any system that so requests, and will bill the polled system for phone costs. The phone costs are expected to be $10-20/month. Requests for an application should be sent to

The initially most significant service will be to provide a rapid access newsletter. Any node can submit an article, which will in due course propagate to all nodes. A “news” program has been designed which can perform this service. The first articles will probably concern bug fixes, trouble reports, and general cries for help. Certain categories of news, such as “have/want” articles, may become sufficiently popular as to warrant separate newsgroups. (The news program mentioned above supports newsgroups.)

The mail command provides a convenient means for responding to intriguing articles. In general, small groups of users with common interests will use mail to communicate. If the group size grows sufficiently, they would probably start an additional news group.

Complete programs and other machine readable text are inappropriate for transmission via (ordinary) news. On the other hand, if a news contributor announces a new version of “x.c”, he could be inundated with requests such as “please mail dodimum a copy of x.c” To avoid that, he could make his copy of x.c directly accessible to anyone via the uucp file copy program. In order to reduce uucp traffic, copies could be made at the more central nodes of the net. Traffic will be reduced further by extending news to support “news on demand.” X.c would be submitted to a newsgroup (e.g. “NET.bulk”) to which no one subscribes. Any node could then request the article by name, which would generate a sequence of news requests along the path from the requester to the contributing system. Hopefully, only a few requests would locate a copy of x.c. “News on demand” will require a network routing map at each node, but that is desirable anyway.

It is hoped that USENIX will take an active (indeed central) role in the network. There is the problem of members not on the net, so hardware newsletters should remain the standard communication method. However, use of the net for preparation of newsletters seems like a good idea.

The hardware and software requirements for a system to join the net were mentioned above. The uucp system has been retrofitted to run on the Sixth Edition of UNIX, so both Sixth and Seventh Edition Systems can join. Each node must have a unique name, so all names must be cleared by the network administration. Duke will provide the initial administrative functions, and will also provide software for the network news to function.

Although we can supply a news program, individual sites may prefer to adapt their existing programs. This requires the ability to print and receive articles in the news transfer format. The format used to transmit an article between systems is given below. The first character of the file identifies the format and will be used to simplify inevitable changes in article formats. The rest of the first line is a unique system-wide name, which also identifies the originating node. The article name is used to prevent the unlimited duplication of news articles that might otherwise occur. It has a side benefit of simplifying the implementation of a ‘news on demand’ facility. Support for newsgroups (line 2) is required. All network newsgroups will have the prefix ‘NET’. Support for contributor name (line 3) and contribution date (line 4) are recommended. A ‘deletion date’ is not supported; it is up to each node to delete ancient news. Line 5 is the (alphabetic) article title.

Continue to read more about the History of USENET

*UNIX is a Trademark of Bell Laboratories.