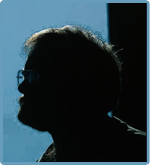 Brad Templeton is Canadian born software engineer and entrepreneur. Graduating from the University of Waterlooo, Templeton first made an impact to the online world with his involvement in USENET. As one of the most widely read moderated newsgroups in existence, Brad originated rec.humor.funny over 20 years ago which attracted an estimated half a million readers each day.

Starting as an ARPANET mailing list in 1979, right before the USENET had surfaced; he attracted an audience that was soon shadowed by the huge following it would receive on newsgroups.

It was from his involvement and experience with USENET newsgroups for years that he later founded and grew further success from the very first internet-based content company, ClariNet Communications in 1989. ClariNet grew quickly to become the largest electronic news service on the internet in its time, drawing over a million subscribers. Brad would eventually sell the company in 1997.

In its wake, Brad has kept himself quite busy. Mr. Templeton has created a variety of software programs, written a great deal of books ranging from politics to copyright and currently sits on the board of the Foresight Nanotech Institute, the leading advocacy and watchdog group for molecular nanotechnology.

Brad Templeton also sits as a chairman of the Electronic Frontier Foundation. The EFF has long defended free speech, privacy, innovation and consumer rights for the online world. Since his involvement, Brad has been a part of a series of victories the EFF has achieved. He currently is also on the board of BitTorrent, Inc. and is an active artist at Burning Man and photographer. He maintains a blog called Brad Ideas.

Click here to read our interview with Brad Templeton