What Is USENET ? – A Brief History of USENET 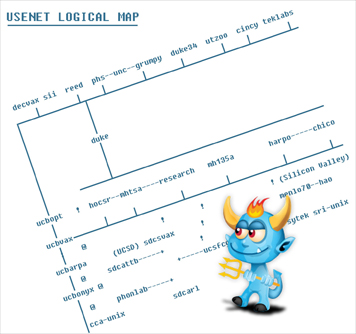 USENET is the village elder of the Internet. Its origins date back to 1979, when two graduate students at Duke University, Tom Truscott and Jim Ellis, tried to solve a problem: how best to communicate with, or send news to, another local university. The early days weren’t exactly user-friendly, with message sending and reading relying on Unix-to-Unix Copy Program, a simple program that sent relay messages between computers. Six years later, with the introduction of the Network News Transfer Protocol, thanks to its reliance on the far more accessible TCP/IP, USENET found a wider audience.

Google Groups, the largest, most thorough, archive of USENET messages ever assembled, lists the following as its oldest message, posted in May, 1981 to net.general:

“Won’t we need to change the .ngfile also? Also is ALL an acceptable newsgroup on the left side of the dot such that ALL.ALL will catch everything?”

Then came the reply:

“Rusty is right (or is that “Rusty is Wright”?) – we have ALL in our .ngfile so I tend to forget this. ALL.ALL may or may not work, but ALL certainly does.”

This typifies the early days of USENET: a gathering place where like-minded, computer savvy, Internet pioneers could hash out the lay of the land long before the likes of AOL started clogging up your mailbox with free CDs offering so many hours of Web access.

Whereas the World Wide Web, which was nothing more than an idea on a piece of paper as late as 1989, and didn’t really hit its stride until the introduction of the Mosaic Web browser, in 1993, can be described as a more static experience – read page after page, with minimal interaction with the creator – USENET has always been, and
continues to be, more about conversation, about the interaction between people on opposite sides of the globe. Long before political junkies talked past one another on blogs there was alt.politics, where armchair policy-makers argued the finer points of the art of the possible. Long before gamers could tweet their favorite games of the year there were groups dedicated discussing strategies and insights of the latest adventure game. Disputed sports calls were dissected in the rec.sports* hierarchy well before your local sports talk radio station even had a Web site.

USENET gained its familiar hierarchy, with the largest such designations (comp.*, misc.*, news.*, rec.*, sci.*, soc.*, and talk.*; alt.* was added soon afterward) informally known as the Big 8, in 1987. The idea was to better organize what had become something of a hodgepodge of groups. Computer users could try to track down a bug, or announce the release of a new piece of software (as Linus Torvalds did with Linux in 1991 in comp.os.minix) in the comp.* hierarchy, while users could discuss the latest news of the day in the news.* hierarchy.

Continue on and read the interview with Tom Truscott and Brad Templeton /usenet-anniversary-interview.php

The ability to post and download binary data has served to extend USENET’s usefulness, and has, in part, helped maintain USENET’s status as a premier Internet destination. Software developers upload their latest creations, graphic designers showcase their artistic talents, musicians looking to make a name for themselves give away their latest recording.

Internet fads come and go, but USENET is forever.