History of Usenet – What is Usenet? 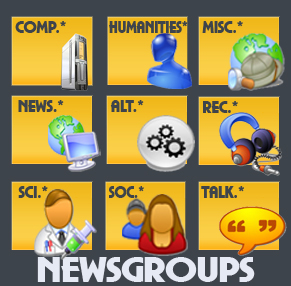 The complexity of Usenet and newsgroups makes it difficult to really define how it really works. Since there is no central authority or ‘hub’, Usenet adds to its resume of being different than most any other communication system currently in existence. As Usenet is a set of protocols that generate, store and retrieve articles into its correspondent categories (Usenet Newsgroups), it propagates copies throughout a network of news servers. Once it reaches that server, it then passes the message along to the next server, and so on. These servers hold the information and continue to share the information to each server in its network, allowing the international community “synced” with the same information across the network.

As an example, it’s like giving an international press conference. You have a variety of different media representatives (servers) recording the information you give them. In turn, these members of the press (servers) pass along the information throughout its network. They work in tandem to deliver the same message over different channels in order to reach the maximum amount of users despite what channel they may be on.

Obviously, it’s not the best analogy, but gets a better focus on how this decentralized network propagates information. When you post an article to a particular category, or Usenet newsgroup, the article is not merely sent to one location, rather echoed throughout a variety of servers replicating the same information to ensure that it is widely available despite location. Also, each article receives a unique identification number which allows the Usenet system to clear itself from duplicating the same information to each server.

The length of time it takes for an article to replicate throughout all the available server channels varies on a number of factors. The size of the file is one of the most crucial factors that determine the time it would take to pass the information across these networks. Other factors include the density of the Usenet newsgroups posted to as well as the time of day. Although not clearly specified as each news server is unique, there are periods that servers are set to in order to scan or accept articles which can vary from seconds and minutes to hours and days. For a normal text article, it would be safe to state that a day or two would be the normal range in which the information would be replicated.

Administration of these servers is managed by its corresponding organizations. Because of this, Usenet and newsgroups cannot truly ever go ‘down’ as if a server in this network is turned off or compromised; there are other joined servers that constantly recreate its schematics and configuration. This also means that there is no one authority that manages the Usenet newsgroup system in much the same way the internet is independent from any one particular control.

« Back to ‘Beginning’
Forward to ‘Uncensored Usenet’ »
Menu